Change at the top of TRIOPTICS GmbH

On April 1, 2022, Eugen Dumitrescu will be stepping down from his executive position after 30 years at the helm of the Wedel-based company as he hands over the responsibility to a new and extended management team. In addition to Dr. Stefan Krey and Joern Luethje, who have already been appointed as the CTO and CFO respectively, the new TRIOPTICS management board will be completed by Kristin Holzhey (CEO) and Simon Zilian (CSO) from January 1, 2022. Eugen Dumitrescu, who founded the company in 1991, will remain with the company until March 31, 2022, as an active managing director and then as a member of the advisory board. Since September 2019, TRIOPTICS has been a member of the Jenoptik Group, which is based in Jena.

Kristin Holzhey, who has been with Jenoptik since 2007, is changing rivers from the Saale to the Elbe to take charge of the company specializing in optical measurement and production technology. After training as an industrial business manager at Jenoptik and graduating with an MBA in General Management in Great Britain, she has held various positions within the Jenoptik Group and even served as an advisor to the CEO. Kristin Holzhey has been the Managing Director of OTTO Vision Technology GmbH since 2019 and has been directing the integration of the TRIOPTICS Group into the Jenoptik Group since 2020. As of January 1, 2022, Kristin Holzhey will be the Vice President in charge of the “Optical Test & Measurement” strategic business unit at Jenoptik and will take on her new role as the CEO of TRIOPTICS.

The other new addition to the management team is Simon Zilian, who has been with TRIOPTICS since 2005 and has played a key role in driving the company’s growth over the past 16 years. After graduating with a degree in physical engineering from a university of applied sciences and gaining professional experience at eurolaser, he first moved to TRIOPTICS as a sales engineer and was appointed as head of sales in 2009. Simon Zilian has been a member of the management board since 2019. As of January 1, 2022, he will be the CSO responsible for Sales, Marketing, Service and Customer Care within the TRIOPTICS Group.

Well positioned for the future

The new generation of executives and the experienced team of employees will put TRIOPTICS in a strong position to overcome the challenges of the future consistently and successfully. 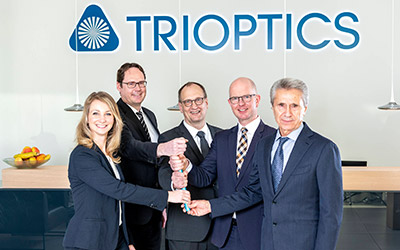