The increased demand for complex camera and lidar systems used in automated object recognition and classification, for instance in the safety & surveillance sector and automotive industry (keywords: autonomous driving and driver assistance systems), has resulted in new and more stringent requirements for the characterization of image quality and the assembly of camera modules. The entire test chain for optical systems, sensor components and complete camera systems must meet these new requirements. With the CamTest series, TRIOPTICS offers the matching technologies and benefits from its long-standing experience in optical testing and complements them with new measurement systems for opto-electric and opto-mechanical parameters.

The product range covers all use cases for testing the image quality of camera modules. This results in four different types of measuring processes: CamTest MTF, CamTest Focus, CamTest Chart and CamTest Spectral.

In addition to the complete camera characterization, the measurement parameters are used for an inline calibration of the tested modules.

The most versatile measuring system

CamTest Smart is an end-of-line test system that enables comprehensive testing of camera modules. With the help of focusing collimators, a test chart and an integrating sphere integrated in only one device, the End-of-Line test can be realized. 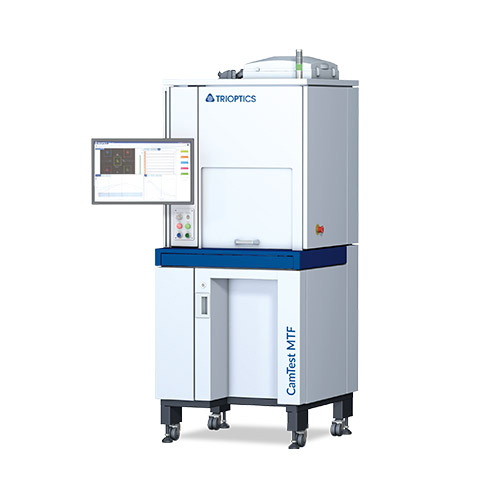 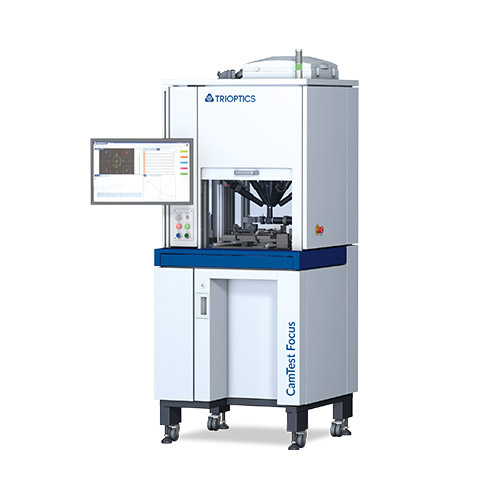 The collimator virtually projects the target onto the sample. By using focusable collimators, any object distance of 1m to infinity can be generated. This makes it possible to measure the position and tilt of the best focus plane. 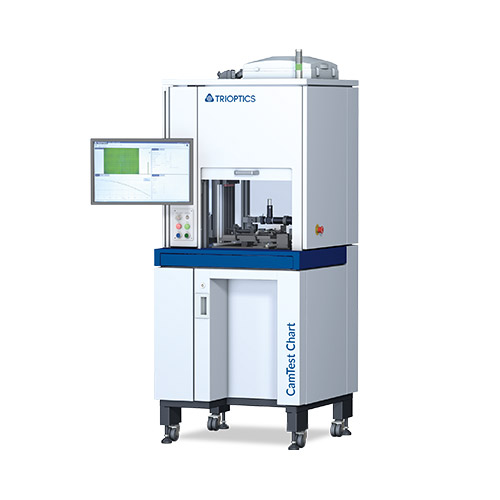 The CamTest Chart system projects a test target from finite or infinit object distance to the camera module under test. For an infinite test setup a specially designed relay optic is used. With the help of a suitable optical structure, cameras with a highly distorted optical system can also be calibrated. 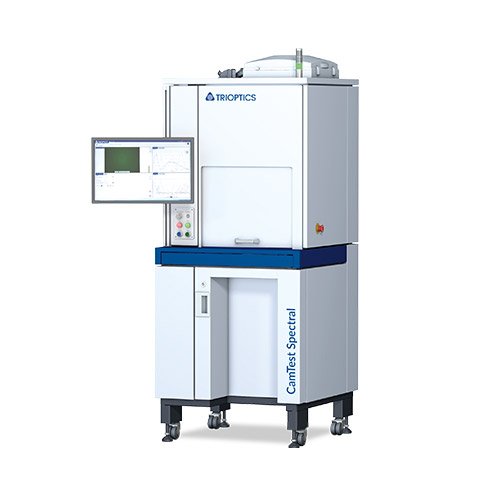 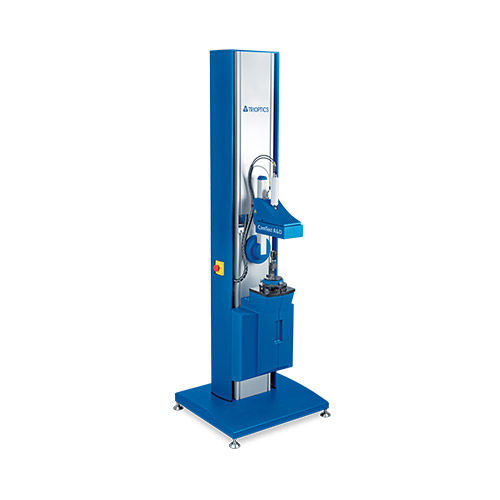 The CamTest R&D is a high-precision measurement device for testing a variety of image quality parameters of camera modules. The computercontrolled test target distance can be freely selected from finite distances to infinity using a focusing collimator. 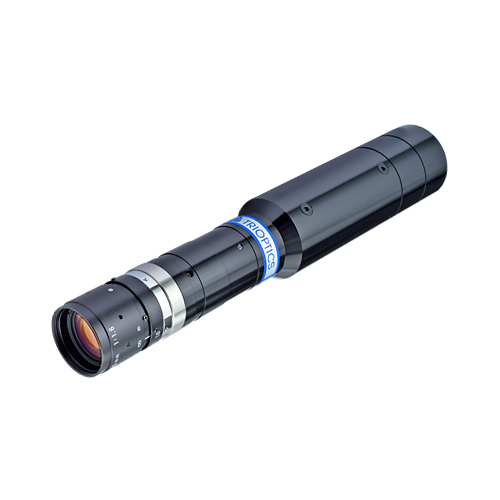 The CamTest ColMot system is a series of industry-leading optical target projectors providing virtual test targets for the performance test of electronic camera modules or objective lenses. The main application is the test for camera image quality, lens alignment and focus precision.

The new CamTest ColMot 6.0 is characterized by a very long product lifetime, high speed for fast measurement and short cycle times. It is very user-friendly and has improved maintainability with an integrated cycle counter, temperature sensor and internal data storage of collimator-specific data. 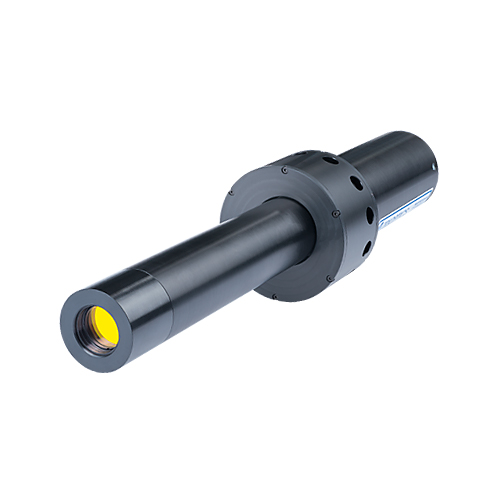 The first edition of CamTest LWIR collimators enables automated mass production of thermal imaging cameras. For manufacturers of thermal imaging, thermographic or infrared cameras used in the military and in the surveillance of buildings, industrial plants or people.

The LWIR collimators are characterised by a special compactness. This allows integration into different dome configurations for simultaneous measurement of the camera’s entire field of view at different ROIs. Cooling is provided via fan. A specific reticle for the LWIR and focal length range as well as a homogeneous collimated light source are available. Controller with safety PLC enables monitoring of the collimators and safety-related connection to the automation system.

Your product request for CamTest

The software is particularly user-friendly. The user is automatically guided through the measurement process. The output of the values can be done as pass/fail output. Measurement certificates are generated directly from the software in order to ensure complete traceability. The CamTest software supports the following measurement parameters and their analysis: 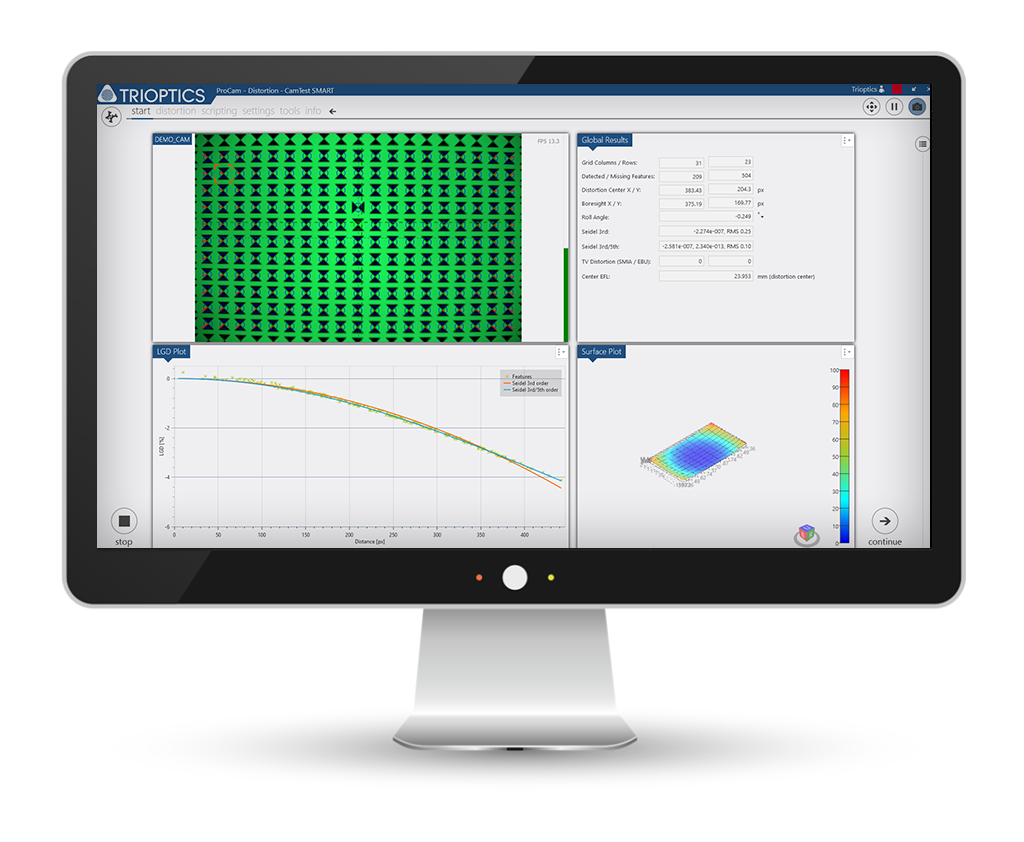 1) EFL outside the specified ranges possible, after testing the lens characteristics

Image quality testing of complete cameras and assembled camera modules is done by imaging a suitable target using the camera module under test and evaluating the quality of the reproduction of the target. New approaches for testing methodologies are required to keep up with technological developments and economic pressure. Most of these can also be used in a similar fashion for all other camera testing applications, from high-end scientific to thermal imaging surveillance cameras.

Most consumer-type camera modules are integrated into devices such as smartphones and webcams and use relatively short-focal-length (1 to 5 mm), wide-field-of-view optics and either CCD or CMOS color sensors.

The parameters typically extracted during testing of such a module can broadly be classified into five categories: image quality via the modulation transfer function, the spatial frequency response; properties of the optical system (e.g., distortion, relative illumination); optomechanical properties (e.g., relative alignment of the optics and the sensor or autofocus precision); color properties (e.g., color rendition, white balance); and sensor properties (e.g., dynamic range, linearity, noise, bad pixels). For modules incorporating flash capabilities, the alignment, illumination profile and intensity of the flash unit can be characterized as well. We will focus on the first three topics .

This article inspired you? Are you looking for further knowledge transfer? Then you might also be interested in the following topics…

Measurement of the
modulation transfer function

Innovative solutions
for the automotive industry

Although most camera modules are designed to be used with the object at a larger distance (infinite conjugate), conventional testing techniques usually place a test target with various patterns – typically a test chart – at a shorter distance (finite conjugate) from the module.

Today, testing with test charts in finite distance is standard, done by image analysis software in real time.
Figure 1 shows a schematic representation of a test chart system in finite configuration. The device under test (DUT) is placed in front of an illuminated chart with different markers and patterns on it. An image is then taken with the DUT, and software algorithms analyze the position and shape of the markers, and extract the performance parameters of the camera module.

A modified version of this setup incorporates a relay lens in between sample and chart to create a virtual image of the chart as seen from infinite distance. This approach usually requires a custom, high-quality relay lens, especially for larger-field-of-view applications and broadband (e.g., daylight) illumination, which can make such a setup complex and commercially unviable. This solution should be used only if infinity conjugate measurement and a more complex chart evaluation are required.

This test chart technology is relatively easy to deploy and combines a high density of measurement points with the ability to use different types of markers and patterns on different field positions of a single chart. It is typically used for sensor resolutions of up to 13 MP and testing in finite or close-to-infinite distances. However, because of recent advances in manufacturing technology, this technology reaches its limits as the industry moves to sensor resolutions of 13 MP and higher, which tightens the requirements on optics and the alignment of the individual components of the module.

Common precision and repeatability bottlenecks include the need for high homogeneity of the illumination over a large area, edge contrast and precision of the patterns on the test charts, and the required reproducible spectral distribution lighting, which is usually done with LEDs.

The size of the test instrument is another important factor in a production environment: For the wide-angle, large-field-of-view optics typically found in consumer camera modules, a large test chart is required. The larger the angular field of view, the larger the test chart must be for a given finite object distance, which cannot be set too small for infinity-set fixed-focus objectives. The situation is similar for modules that have a focusing capability – in this case, shorter object distances can be used, but the setup does not properly reflect the final application. For large test charts, the corresponding large instrument requires more precious factory floor space. 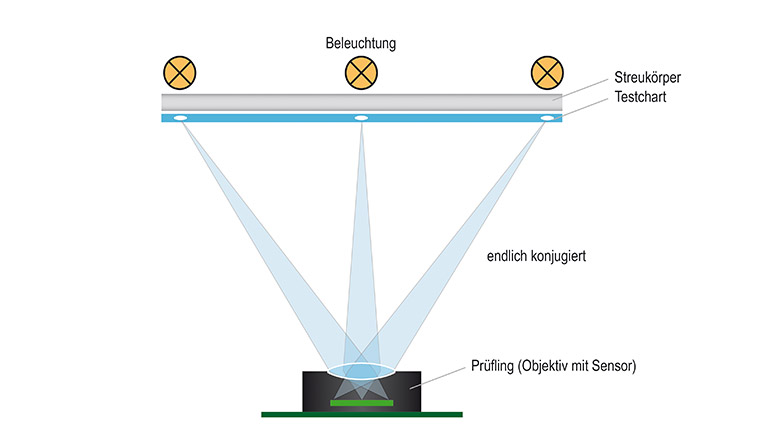 An alternative approach for testing camera modules with larger object distances between about 1 m and infinity is to use a set of collimators as target projectors where each measurement point on the image sensor is provided by a dedicated collimator. A collimator consists of an illuminated target structure (the reticle) in the focal plane of an objective lens. The collimator projects the target virtually onto the DUT (Figure 2). The collimators can be either fixed-focus with preset infinity or finite object distances, or they can be motorized for variable object distances.
The collimators are arranged in space so that the optical axes meet at the entrance pupil of the DUT. Different off-axis angles then correspond to different image positions on the DUT sensor, with on-axis being the center position on the sensor.Although this setup is more complex than a test chart setup, it offers several advantages and higher flexibility for testing at different object distances.
Figure 3 shows a typical collimator arrangement with nine collimators, all pointing into the entrance pupil of the DUT below (not shown). The spherical dome support allows the adjustment of the collimators to different object angles 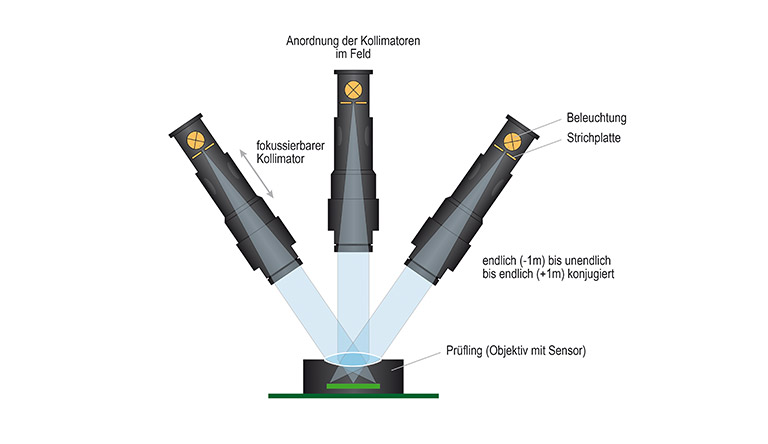 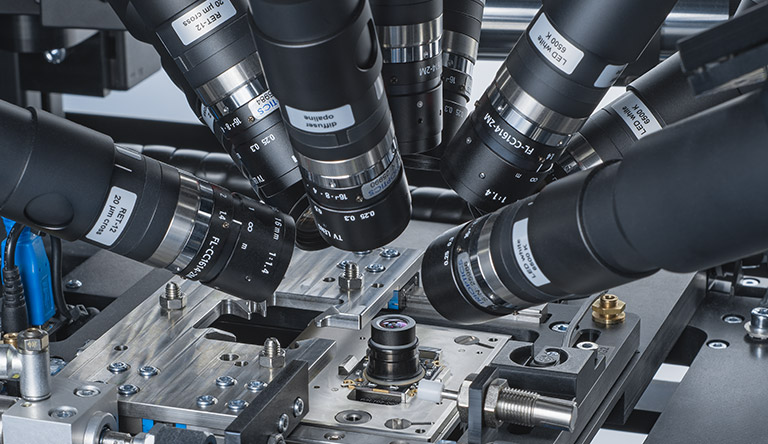 Advantages of testing with collimators

The potential of active alignment

The image acquisition and transfer time for most camera modules is short, so the data obtained from the DUT also can be used in production to proactively and automatically align the optics and sensor to each other in a real-time, closed-loop process so that the combination delivers the highest possible performance. Besides the simple three-axis alignment for focusing (Z) and centering (X-Y) of the sensor, rotation and, especially, sensor tilt relative to the image plane of the optics can be adjusted (Figure 4). The tilt adjustment becomes increasingly important for high-performance, high-resolution modules with short depth of focus to reach the required image quality. As sensor resolution increases and the required tolerances become smaller, the industry is forced to use automatic alignment systems instead of further reducing manufacturing tolerances.
Depending on the application, either a collimator arrangement or a finite test chart is used to provide the required information for the multiaxis active alignment system. To fix the achieved camera alignment, a glue dispenser with UV light curing can be embedded into the system, making the instrument a fully automated fabrication station for camera modules. 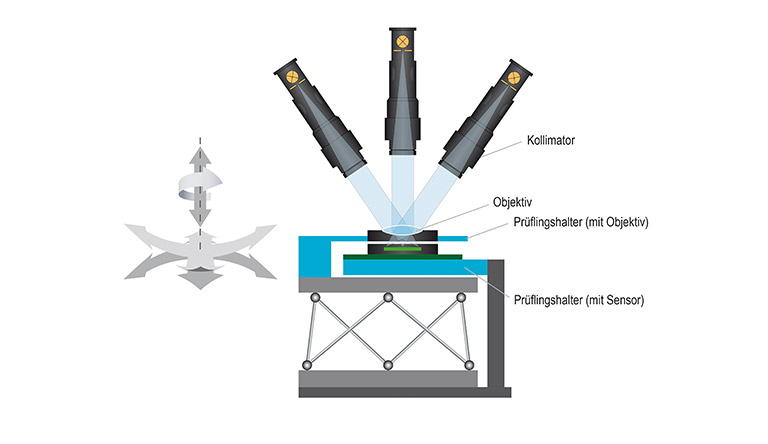