WEDEL. On December 1st, 2021, the optical metrology specialist TRIOPTICS celebrates its 30th anniversary in business. The company, headquartered in Wedel near Hamburg, is one of the world’s leading companies in the field of optical measurement and manufacturing technology with subsidiaries and sales partners around the world. TRIOPTICS’ products and systems accompany and improve the development, production, and quality control of optical components, lenses, camera modules, and sensor systems worldwide.

Driven by the idea to significantly develop and lead the field of computer controlled optical metrology, Eugen Dumitrescu founded TRIOPTICS on December 1st, 1991, in Wedel with two partners. The primary focus of TRIOPTICS has always been the customer-oriented development of optical measurement systems, later expanding to include manufacturing instruments. Early on, TRIOPTICS opened subsidiaries in Asia and the USA to quickly provide on-site support to their customers. 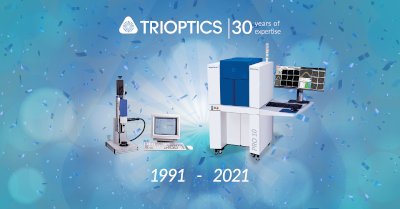 The first products created by TRIOPTICS were the automatic spherometers SuperSpherotronic for measuring the radius of lenses, the OptiTest® series of autocollimators, telescopes, and collimators and Optomatic, an instrument for testing the optomechanical parameters of lenses. From the mid-1990s, the systems were followed by the first PC-controlled test instruments such as electronic autocollimators, goniometers, and centration test devices, the so-called OptiCentric® series.

A milestone in the company’s history was the development of its own inspection systems for measuring the modulation transfer function (MTF), the ImageMaster® series, at the beginning of the 2000s. With the invention of the first cell phone cameras, a new, rapidly developing market emerged for MTF inspection. This enabled TRIOPTICS to achieve significant growth. The ImageMaster® PRO series became the worldwide standard for the final inspection of smartphone camera lenses.

Later, in the 2010s, active alignment of camera modules was developed with the emerging ProCam® and CamTest product lines. TRIOPTICS increasingly established itself as a reliable supplier of optical measurement and manufacturing instruments for camera and sensor systems in the field of autonomous driving, while also offering tailored customer solutions for the market of augmented and virtual reality applications.

Over the years, TRIOPTICS has consistently expanded its product portfolio, continuously improved established measurement methods, and placed a significant focus on the automation of its systems. Large international and interdisciplinary customer projects are just as important as the continuous development of the standard TRIOPTICS portfolio of products. TRIOPTICS serves the entire optical production value chain as one of the leading suppliers of optical measurement and manufacturing systems.

In 2018, the company moved to its new headquarters in Wedel, just a few hundred meters from its founding address. In the meantime, roughly 500 employees worldwide work towards the success of TRIOPTICS. Strengthened by the 2020 integration into the Jenoptik photonics group, TRIOPTICS continues to grow and continues to work today on the optical challenges of tomorrow.