With its ImageMaster® product range, TRIOPTICS is the market leader for MTF (modulation transfer function) measurement equipment for high-precision determination of image quality. The ImageMaster® series has been specially developed for measuring the MTF to enable the precise determination of the imaging quality of lenses and optical systems. For this purpose, in addition to the MTF as the generally accepted method for determining the imaging quality of a lens, a variety of other optical parameters are measured.

We offer a comprehensive product range for software-supported fully automatic measurement of the modulation transfer function (MTF) for both R&D and production or optics manufacturing.

Things to know about MTF measurement

What is MTF and what is the purpose of MTF measurement?

The modulation transfer function (MTF) is the generally accepted and fundamental parameter for the characterization of optical systems worldwide. MTF is a quantitative measure as well as an objective criterion for the imaging quality of optics.

For which optics is the MTF measured?

The importance of MTF measurement for optics

The MTF is a tool for optical designers to quantify the overall imaging performance of a system in terms of resolution and contrast. Knowledge of the MTF curves of the lenses and camera sensors involved in an optical system is used for optimization of the optical system performance.

Lenses can vary in their imaging quality during production. To meet the often high demands on imaging performance, lenses are characterized and evaluated using MTF as the most important parameter. MTF provides a meaningful quality function for the objective evaluation of optical systems in the optical industry. When it comes to imaging an object with the desired accuracy, MTF data provide the necessary basis for optical design. Resolution and contrast are of particular importance. MTF data can greatly simplify the selection of the appropriate lens for an application.

MTF measurement in the wide spectral range from UV to visible spectrum and IR.

Testing image quality in temperature ranges from -40°C to 120°C.

Testing and fine-tuning of the image quality of high-quality lenses from the photo and film industry.

Software solutions for R&D and production

User-friendly software for research and development as well as laboratory work.

Software for MTF testing in production. 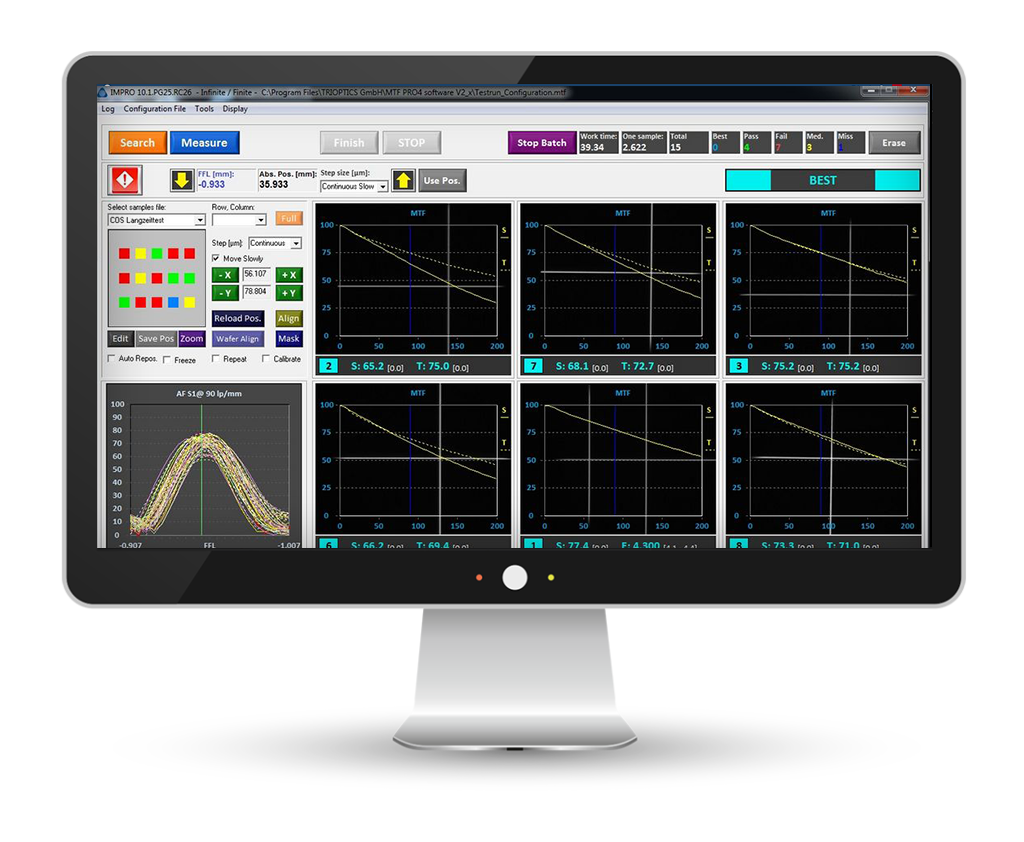 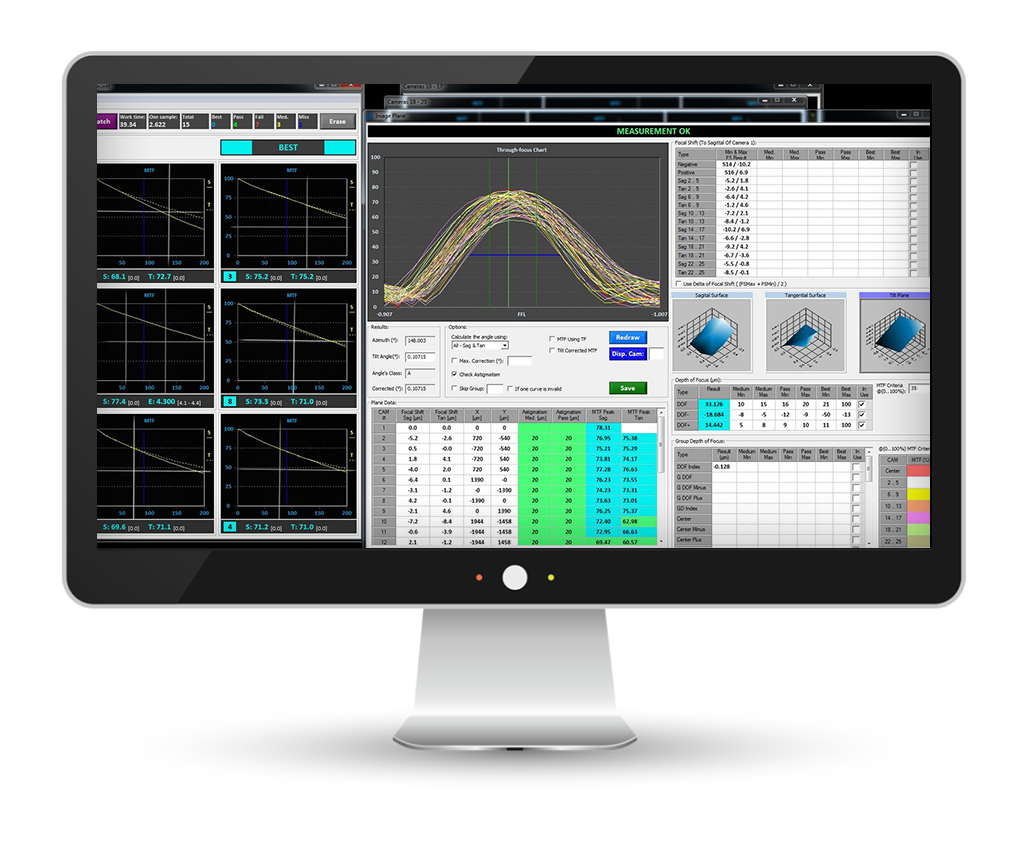 The Modulation Transfer Function (MTF) is an important aid to objective evaluation of the image-forming capability of optical systems. Not only that, the MTF also provides a means of expressing the imaging quality of optical systems objectively and quantitatively, but it can be calculated from the lens design data. In this way it allows optical and systems designers to predict reliably the performance of the optical systems. Manufacturers can compare the image quality of the manufactured lenses with the design expectations.

The Modulation Transfer Function (MTF), describing the resolution and performance of an optical system, is the ratio of relative image contrast divided by relative object contrast.

When an object (illuminated target or reticle) is observed with an optical system, the resulting image will be somewhat degraded due to inevitable aberrations and diffraction phenomena. In addition, a real lens will not fully conform with the design data. Manufacturing errors, assembly and alignment errors in the optics will deteriorate the overall imaging performance of the system.

As a result, in the image, bright highlights will not appear as bright as they do in the object, and dark or shadowed areas will not be as black as those observed in the original patterns. In general, an illuminated target can be defined by its spatial frequency (number of bright and dark areas per millimeter) and the contrast (the apparent difference in brightness between bright and dark areas of the image).

Fig.1: The grids shown in the figure are actually no longer used in order to measure the MTF.

Modern MTF- Testers like the ImageMaster® use a single illuminated slit on an opaque background as the object. From a mathematical point of view a single slit can be regarded as the sum over all spatial frequencies (Fourier synthesis). All frequencies contribute with the same amplitude (=1) to this slit, not taking the finite slit width into account for this description. This single slit will be imaged into the image plane of the sample. Due to diffraction and aberrations, there will be no perfect slit image in this plane, instead the slit image is broadened. It represents the Line Spread Function (LSF).

Alternatively, it is also possible to use a cross (i.e. two perpendicular slits) for the target. This enables the ImageMaster® to measure the MTF in two image directions simultaneously provided a CCD camera is used for the image analyzer. And finally, a pinhole target can be used as the object, too. The image of a pinhole target is called the Point Spread Function. This function contains the complete MTF information in all image directions. The basic terms and mathematical relations used for MTF are described in the ISO 9334 standard.

The modulation transfer function varies in relation to the spatial frequency and also with the position in the field of view. The MTF measurement along the axis of symmetry of the optical system is known as on-axis measurement.

The MTF measurement can be accomplished at a single wavelength or in a spectral range covering a finite band of wavelengths. The resulting measurement data are known as monochromatic or polychromatic MTF values, respectively.

Usually, the MTF is used in its one-dimensional form, calculated for one azimuthal section through the image plane. The azimuth (section plane) of the object pattern is called the sagittal azimuth when the prolongation of the slit or object passes through the reference axis. When the prolongation of the slit pattern is perpendicular to the reference axis, the azimuth is called the tangential azimuth.

TRIOPTICS offers a broad product portfolio in the field of MTF measurement. This also includes model variants for measurement requirements that result from the latest technology trends for smartphone camera optics.

High-resolution, professional photography and the zoom capability of cameras are two further key drivers for the future. All three trends cause new challenges for measurement technology, for which TRIOPTICS is introducing customized measurement solutions for image quality testing.

For years, the ImageMaster® PRO product family has set the global standard for testing the imaging quality of mobile phone camera lenses in mass production.

The ImageMaster® PRO devices are the fastest and most precise devices worldwide.

With the three new developments of the ImageMaster® PRO series TRIOPTICS underlines its technology leadership also for the production of future mobile phone camera lenses.